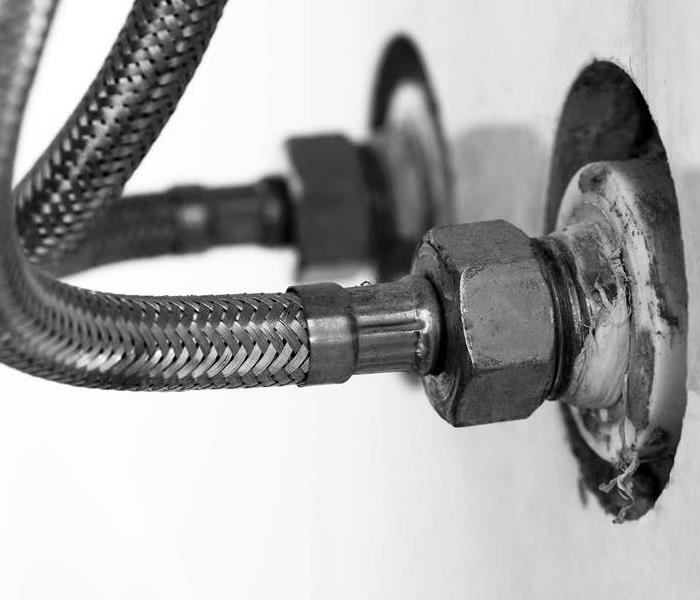 Our Technicians knew exactly what to do with this water clean up in Jacksonville.

SERVPRO was there for this Jacksonville water damage in a jiffy.

Imagine coming home from vacation to see water pouring out the side door of your house from the laundry room! Our client, who was on vacation for a week, came home to find that a hose had burst in the laundry room while away. There is no indication of how long the water was leaking from the pipe. It was long enough to leave water over the majority of the main floor of their home. The burst hose was attached to the washing machine. It had not been replaced in many years.

SERVPRO technicians responded to this water cleanup emergency in Jacksonville as soon as the customer called our office. The client was distraught. There was a great deal of concern about wet area carpets on the tile floors, various boxes, and items left on the floor. Fortunately, there was not a great deal of water on the floor. Water flows to the lowest point in the house, which in this case was towards the side door.

Before our team even arrived, the client turned the water off to stop the water leak. The owner also began removing wet items from the area and placing Styrofoam blocks under furniture legs. Our team continued by vacuuming water off the floor and from the wet carpets. Drying and air mover equipment were brought into the home to continue removing moisture. The air conditioning was turned on, which also helped to remove more moisture from the home.

Moisture meters were used to assess if water had penetrated the walls under the baseboards and into the substructure. Moisture was contained to the laundry room and the kitchen area. Holes were drilled into the walls to confirm that the moisture levels were satisfactory in these rooms. Moisture levels quickly began to decline, once the water was removed. SERVPRO was able to dry the area carpets and various items to the customer's satisfaction. In the future, the owner plans to turn off the main water shut off valve to the home to avoid future potential water leaks and damage.

Call SERVPRO of Jacksonville South at (904) 762-8066 for 24/7 service. We serve Town Center, Baymeadows, San Marco, and surrounding areas. We're Faster To Any Size Disaster. We clean up your home, "Like it never even happened."